As my family and I prepare to move across the country this summer, we’ve started making our “must visit” list. What places do we need to explore again while we have the chance?

This museum is a definite maybe—it was always a favorite and might be even better now that the kids have had four years to grow. They were all under 8 for this visit. Maybe now I could get some better photos…

In any case, I hope you enjoy this re-visiting of our 2018 visit to the Naval Undersea Museum!

A trip into Washington State’s Olympic peninsula offers opportunities for adventure. From temperate rainforests to snowy mountain peaks to ocean beaches, and from herds of elk to the occasional trespassing mountain goat, the nature-lover doesn’t lack for options.

Of course, most of these options aren’t particularly accessible to those who visit during Washington’s long, gray, chilly, rainy season. (The natives call the rain ‘liquid sunshine.’ I don’t buy it.)

It’s especially tricky for those of us with small children, SO, the Clare brood went looking for somewhere indoors to explore.

The Naval Undersea Museum is located just past the signs for Keyport, Washington.

It met our criteria for an adventure: indoors, kid-friendly, and free. (The last is essential. Nothing’s worse than an outing that has to last long enough to be ‘worth it.’ Inevitably, someone will melt down, vomit, and/or soak their clothes with something.)

On top of these basic requirements, the exhibits were fascinating.

The museum begins in the parking lot. 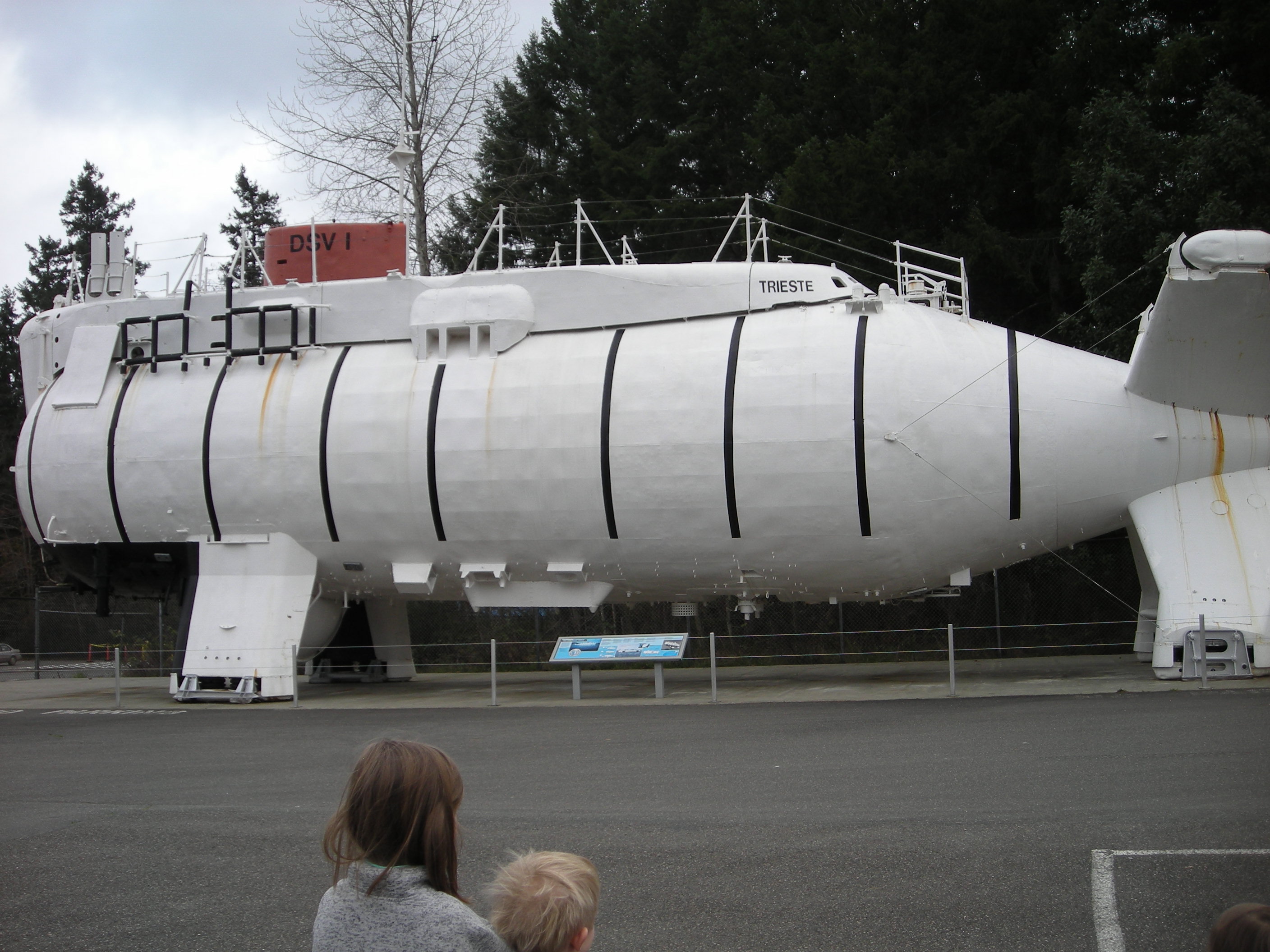 The Trieste II may look good-sized, but do you see the bit of the sphere showing between the two ‘legs’ to the left? That sphere housed the entire crew of two.

Trieste II was the U.S. Navy’s first deep-submergence vehicle. Its deepest dive was 20,236 feet in 1977 in the Cayman Trough south of Cuba.

The deep submergence rescue vehicle (DSRV) Mystic was our next stop.

After all hands were lost in the 1963 sinking of the USS Thresher, the Navy took a long, hard look at their underwater rescue operations, and found them wanting.

Thresher and its counterpart Avalon were built to take on this complicated task. While they ran many successful test trials, mercifully, they never had to be used.

Naturally, once we made our way inside I had to check out the World War 2 exhibit.

The display memorialized all of the U.S. submarines that contributed to Allied victory, highlighting in red the 52 that didn’t make it home.

…and “battle flags” from the era.

Sorry that it’s a bit blurred. The kids didn’t find this section quite as interesting as I did. Moving on…

We all enjoyed learning about the Navy’s training of marine mammals. I found it particularly fascinating to see how dolphins have been trained to find and mark old, unexploded mines so that they can be disposed of safely. (I was also pleased to see how carefully the handlers provided for the safety of the animals.)

Of course, the kids love exhibits that they are allowed to touch. The museum’s rebuilt control room of the USS Greenling was their favorite part. (And yes, of course, I checked out the periscopes and all of the knobs and buttons too!)

Again, I was really the only one interested in the American Civil War era ‘frame torpedo’…

…but they could have spent all day with the interactive displays on water pressure and buoyancy.

There were other exhibits, but the littles were about done.

Our last stop was a sobering one.

They were quiet for a moment, looking at the artifacts from the sunken sub. Enough of their little friends have dads serving under the waves that the Thresher display, simple as it was, made an impression.

The little ones have found me, so in closing I’ll ask then what they liked best about our museum visit.

The conversation is still going on, so I’ll sign off for today.

For those of you still in the inhospitable grip of winter cold or rain, I hope you find your own interesting indoor adventures!

Thanks, as always, for visiting.