I’m always on the lookout for true stories of the Second World War–whether stories of a family heirloom’s history, tales of spies and subterfuge, or histories of courage even in the face of imprisonment.

Twenty years after her father’s death, Ellie Sømme picked up the story that he had written chronicling his wartime experiences.

She read of his secret work, his capture, his escape, his daring journey. With the support and encouragement of family and friends, she brought his story–Another Man’s Shoes–to print.

Sven Sømme wasn’t a soldier or spy when the Germans invaded Norway in 1940. He was a marine biologist. Though he watched as the Germans marched into Oslo, his career soon took him away to an island in western Norway where he was to preside as principal of a fisherman’s school.

It was a quiet place and the inhabitants, though unhappy with their country’s occupation, felt little impact on their day-to-day life.

“They shook their heads and talked about the bad news from the theaters of war…What a bad man, this Hitler. And old woman said somebody should go and speak to him.” (page 27)

As the months went by, Germany’s grip tightened. A former employee (let go for doing poor work) became the Nazi leader in their community, trying to influence the school. Then German soldiers arrived and expressed their intention of building an airfield on the island and their need to confiscate space at the school for offices. German officers began settling themselves into civilian homes without consent. Rumor had it that soon the whole school would be closed and the buildings taken for German use.

Sømme opposed the German interlopers, at first through peaceful, legal means. When, after giving certain assurances to the school, the Germans began to encroach on the school grounds, he confronted the Oberleutnant, reminding him that “the German Wehrmacht never deviate from their word, as the Germans had assured us in broadcasts and in the newspapers.” (pg 43.) He won that argument.

However, in time the school was taken and Sømme (after making sure that his nicely blooming, confiscated garden was destroyed) moved to the island of Otterøy.

While doing his best to continue providing housing and education for his students in this new location, Sømme began printing an illegal newspaper. Unlike the legal, censored, pro-Nazi papers  that were readily available, he used his publication to spread the information about what was actually happening in the country.

Eventually, he was approached and asked to drop the paper and take on a more active role in a resistance spying network. He agreed.

It was dangerous work. Friends and contacts were arrested and then vanished–others fled to neutral Sweden. His own brother, Iacob, who was deeply involved in secret work was arrested by the Gestapo.

“It was a horrible time. Any day I expected to hear that Iacob had been murdered. Any night I expected the Gestapo to arrive.” (pg 100)

After imprisonment and mistreatment, Iacob was eventually shot. Sven’s sister who had helped him went into hiding.
Still, Sven remained free–until he was spotted photographing a German torpedo station.

Sven Sømme’s story continues through his subsequent capture, arrest, and daring escape from right under he guard’s nose, all the way through his trek on foot to Sweden. I don’t want to ruin the story for you, though, so I’ll stop my little sum-up there!

Ellie Sømme not only got her father’s story published, she decided to follow in her father’s footsteps–literally. She and her sister, Yuli studied maps, gathered supplies, and then set off to follow the same route their father had during his escape.

Along the way they saw the places he stayed and even met some of the people who had aided him along the way. At one of these stops, she was handed something that brought tears to her eyes: her father’s shoes. (Here’s where the book’s title comes in.) 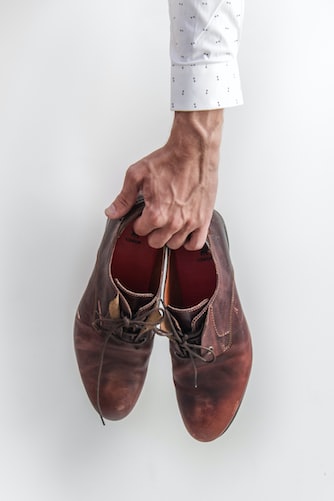 During his flight, Sven  met some young Norwegians who wished to help him.

“Andre looked at my shoes. They were thin and worn and at present soaked from snow and wading.

“You cannot cross the mountains in these shoes. Try my boots to see if they fit.”

The shoes waited for sixty years for Sven’s daughter to come and retrieve them.

I found the stories of Sven and his family fascinating, and an excellent addition to my personal little WWII collection.

It is perhaps worth noting that Sven’s story is just that–his story. It’s not a tightly woven narrative, crafted with cliffhangers for each chapter. Rather, it’s a journey with Sven Sømme, not only through his secret work but also through Norway’s waterways and mountains, to his mountain setter and into the woods to hunt birds, admiring the natural wonders of Norway.

I thoroughly enjoyed this look into Norway during the war years–like the title, it really is a chance to travel through history in another’s shoes.

15 thoughts on “World War II in Norway: ANOTHER MAN’S SHOES by Sven Sømme”