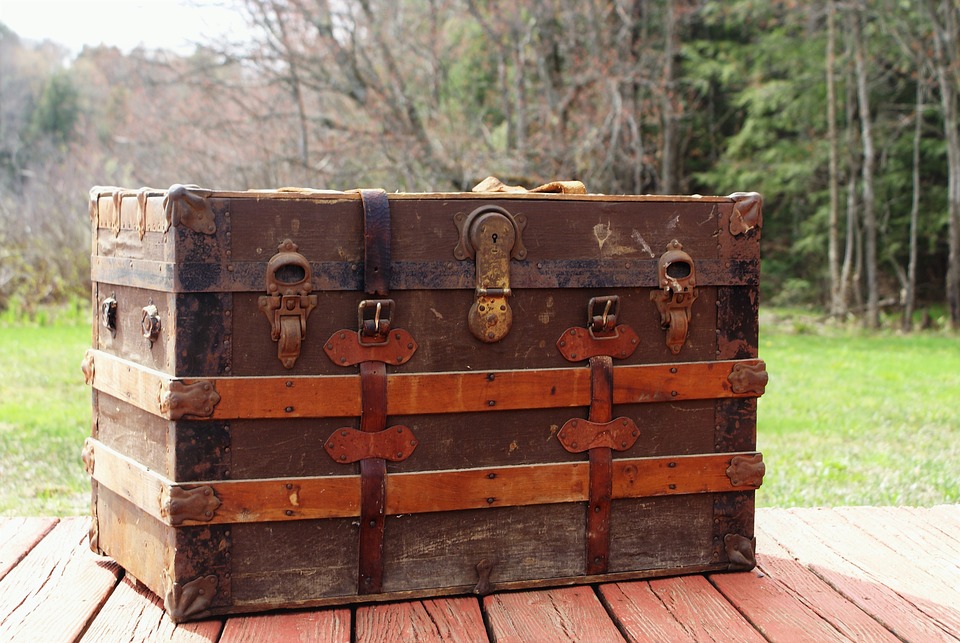 The simplest objects can hold a great deal of history. While decorating for Christmas this year, I couldn’t help but recall the stories behind every piece I unwrapped and aired out from another year’s attic storage: the colorful crocheted and hand-sewn ornaments from my grandmothers, the personalized stockings my own mom presented the kids with a few years ago, the ceramic church that used to sit in the old house in South Dakota. The stories these inconsequential objects hold resonate with me, giving a tangible form to my family’s past.

In her book, The Bride’s Trunk, Ingrid Dixon uses a family object to give that sort of tangible form to the history she relates.  She tells the story of her family’s history through a trunk- a trunk that is over 100 years old, has traveled through several countries, and survived two World Wars.

Born in 1920 in Aachen, Germany, Minny and her family lived and worked on the estate of a wealthy family outside of the city. In spite of the economic hardships Germany faced after the First World War, her family’s position had many benefits including good sources of food and opportunities for her to continue her education- she was the only student in her primary class to continue on into secondary school.

However, as Minny entered her teens, the political situation in Germany was changing. Hitler had risen to power.

The Bride’s Trunk follows Minny’s family through the years leading up to the war, showing how life under the Third Reich influenced the life of the everyday German people. Minny was able to continue her education, but the political climate of the time influenced just what she and her classmates learned.

“A whole generation was being schooled in ideas radically different from those of their parents. In many households parents kept their views private, in case children should inadvertently and innocently let slip casual remarks, betraying their families’ indifference or even opposition to the regime.” (Dixon 54)

As a student, she was automatically enrolled in the BDM (the girls’ version of the Hitler Youth) and as a young adult, hired as a secretary at a local police station, she heard colleagues who made careless remarks that might be construed as disloyal warned by others “dich kassieren sie ein” – “They’ll get you.”

Of course, not everyone in Minny’s life went along with the Nazi’s policies. She witnessed one aunt plotting ways to protect the half-Jewish girl that she had adopted and the child’s natural mother. Her family’s wealthy employer knowingly allowed their cook to smuggle food down to a family that sheltered Jews.

When the Allies finally turned the tides of the war, Aachen was the first German city they encountered. Minny and her mother (and the family trunk) fled with others evacuated from the city, .

The end of Minny’s story is perhaps the most surprising part- after her family’s return to Aachen, they were employed by members of the British occupation forces- and there Minny met Jim, a British Intelligence Corps soldier and her future husband.

Eventually, in spite of some challenges and a lot of red tape, Minny and her family’s trunk ended up joining about 10,000 other German “war brides” who travelled to Britain to become citizens of a country that was formerly “the enemy.”

Without shying away from the dark realities of the time or the atrocities committed by the Nazi regime, Ingrid Dixon does an excellent job of telling the very human story of her mother’s experiences growing up as an ordinary person in times that were anything but ordinary. I found The Bride’s Trunk a fascinating family story and a worthwhile read.

If you’re interested in The Bride’s Trunk or the other stories that Peter and Ingrid Dixon share through their independent publication company, Cloudshill Press, here is their website’s link.

(On a side note, if you’re interested in other stories from the German WWII homefront, I wrote about another interesting one last year: Watching Over Me: A German Girl’s WWII Story of Survival and a Quest for Peace.)

What about you? Have you found any new books that you couldn’t put down? This is a crazy season for many of us- I certainly wasn’t planning on reading a new book last weekend, at least, not until I got all of my house cleaning done. Oh well…

Whether it’s a busy week for you or not, thanks for taking a little bit of it to stop by!

13 thoughts on “The Bride’s Trunk: A Story of War and Reconciliation”