With the release of Hollywood’s newest take on a Second World War battle- succinctly titled Midway– only a week away, it’s high time for me to finish my little series on the history of the Battle of Midway.

I also need to decide if I should start looking for a babysitter to see it in the theater, or just wait for it to come out on rental… (Here’s the trailer- what do you think?)

To briefly recap, Japan’s commanders planned to launch a surprise attack against the United States’ base on the Midway Atoll, capturing and occupying the islands there by June 7, 1942, exactly 6 months after attacking Pearl Harbor.

However, their surprise attack wasn’t a surprise at all. When they began their assault on Midway on June 4, three U.S. carriers were waiting for them: the Yorktown, the Hornet and the Enterprise.

However, Japanese Vice Admiral Nagumo’s mighty fleet was burning. Three of his four carriers, the Akagi, the Soryu, and the Kaga were in flames.

The fourth, the Hiryu, was not. She still had intact planes, and now she knew where at least one of the American aircraft carriers was.

Word came to the Americans- enemy planes were headed for the Yorktown.

In spite of anti-aircraft fire and defending fighters, Japanese planes landed three 250kg bombs on the Yorktown before being shot down. The explosions started fires and extinguished all but one of the Yorktown’s boilers.

The Yorktown’s crew set to work, and soon the carrier was limping along again and able to start refueling her surviving fighters.

Then word came from one of their accompanying ships- the Pensacola- which had been monitoring radar. More Japanese planes were approaching.

The  Yorktown launched her planes, and the ships that screened her set up a heavy curtain of anti-aircraft fire to protect the wounded carrier.

Only two Japanese torpedoes hit home- but they were enough. 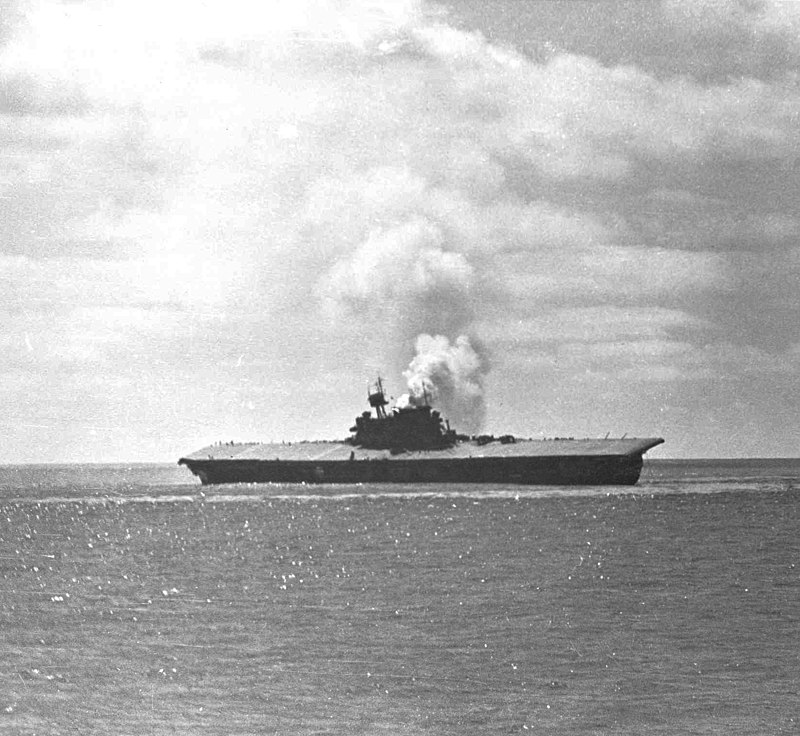 The Yorktown slowed, and her great flight deck tilted, listing more and more to port. Attempts to restore the power failed- all was darkness below decks. Fearing the  Yorktown would capsize completely, the orders were given to abandon ship. 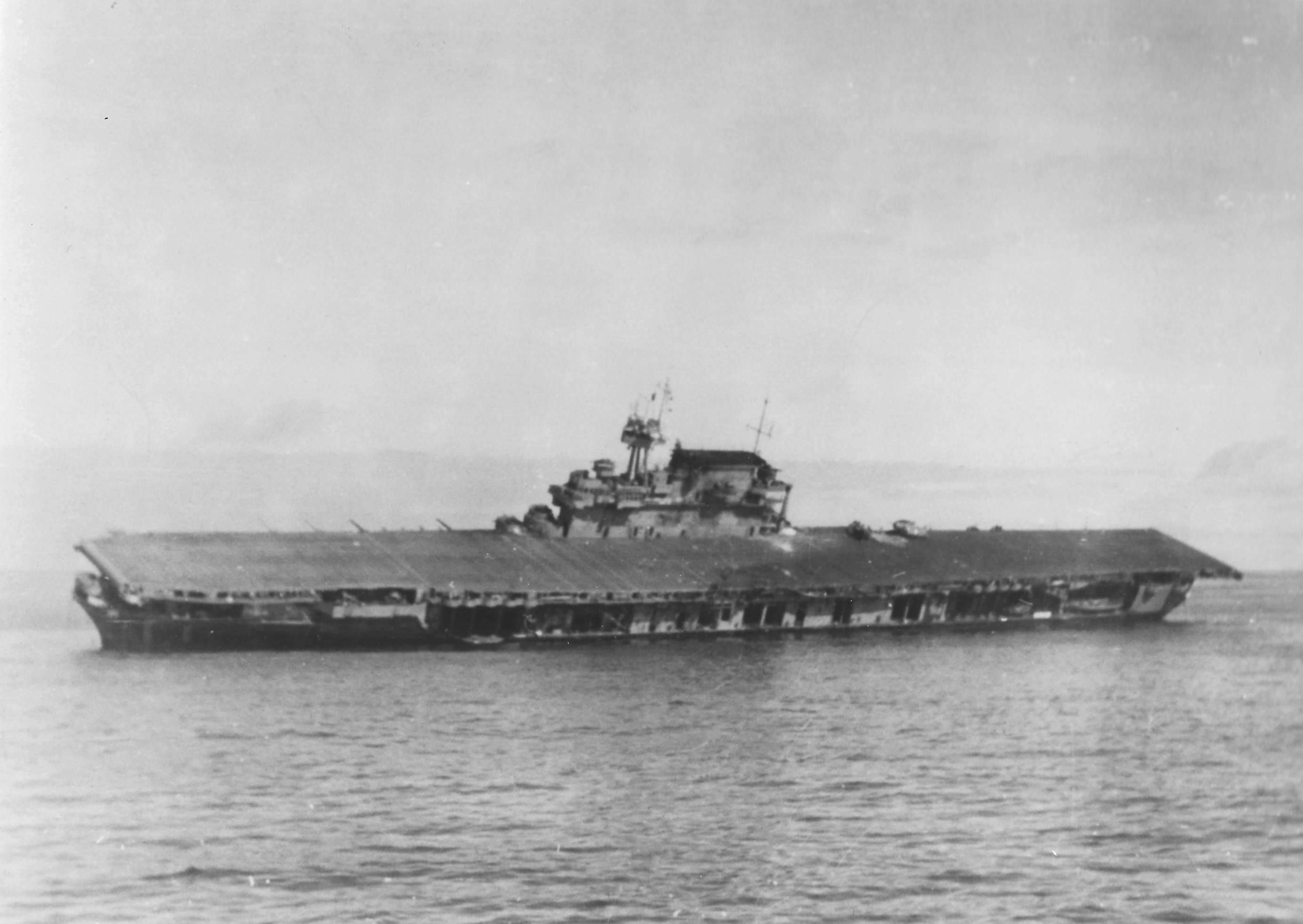 Lt. Joseph Pollard- a flight surgeon- shared his memories of abandoning the Yorktown, describing the scene in vivid detail.

“We listed more and more to port until it was almost impossible to stand on the slick deck. We searched frantically for life preservers for the wounded, taking some from the dead. …

“The speakers were dead and when word was passed to abandon ship, it did not get to me. Several life rafts were in the water but the lines over the side were not long enough to reach the water. Lieutenant Wilson and I tied some lines together and lowered some wounded. Meanwhile the sick bay wounded were being lowered from the hangar deck.” (Kagan and Hyslop pg 114)

Ships stood by to rescue the survivors. Meanwhile, American planes had located the source of these attacks- the fourth Japanese aircraft carrier, the Hiryu.

Six direct hits soon had the Hiryu in flames and left U.S. pilots in control of the air.

The final stages of the Battle of Midway took the next couple of days as forces from the atoll and the remaining U.S. naval forces pursued fleeing Japanese ships and scouted around to make certain that there wasn’t a fifth carrier lurking somewhere out of sight.

During it all, the Yorktown remained afloat but crippled. Salvage crews returned to the carrier, hoping to repair her enough to get her back home (and, in the process, finding and saving a couple of wounded men who had been overlooked in the evacuation.)

Captain Buckmaster organized salvage teams, and had great plans for reducing the list, putting out fires, and pumping water out of the ship. They were making good headway…until 1335 (1:35 pm) when four torpedo wakes were sighted to the Yorktown’s starboard side.

The warnings were sounded, and the crew of the destroyer Hammann, which had been pulled up right alongside the Yorktown to assist in providing supplies for fighting fires, attempted to shoot the torpedoes, hoping to detonate them.

One torpedo hit the Hammann. She sank within 3-4 minutes. While most of the crew were able to get clear, an underwater explosion of unclear origin killed many shortly afterwards.

Two torpedoes hit the Yorktown. The impact was tremendous, but she didn’t sink right away. Destroyers rescued survivors from the Hammann and the Yorktown’s attempted salvagers with hopes that the work could continue. (Others went sub-hunting, though they did not find the one that fired those torpedoes.)

At 3:30 am, someone noticed the Yorktown’s list increasing, and at 5:01 she disappeared into the sea.

In spite of the loss of the Yorktown, the Hammann, and the many men who paid the ultimate sacrifice, the Battle of Midway was unquestionably an American victory.

Japan’s loss of four aircraft carriers and over 100 (irreplaceable) trained pilots derailed their plans for expansion in the Pacific, and was a major turning point in the war.

Worth making a movie or two about? I suppose so, though the real question is whether Hollywood will do the true stories justice.

I suppose we’ll have to wait and see…

What are your thoughts? Do you like film based on real events, or do you prefer to keep entertainment fictional? Does knowing the background to a film make it more enjoyable…or less, as you’re tempted to fact check?

If you’d like more information about the Battle of Midway, please check out my previous two posts on this topic:

The Battle of Midway Part 1: On the Screen and in History

The Battle of Midway Part II: The U.S. Aircraft Carriers Enter the Battle

Once again, I found the Naval History and Heritage Command an invaluable research resource.

I also consulted my brand-new book a friend passed along, (because she knows me too well!) World War II: A Visual Encyclopedia edited by John Keegan, published by PRC Publishing Ltd., London.

Finally, Author Joy Neal Kidney is releasing a book this fall about her five uncles who served- one of whom served aboard the Yorktown and had quite the story to share of his experiences. I won’t give away more here, but if you enjoy family stories of history, you should probably just buy her book 🙂 (I don’t give that recommendation lightly!)

18 thoughts on “The Battle of Midway Part III: The Sinking of The Yorktown”