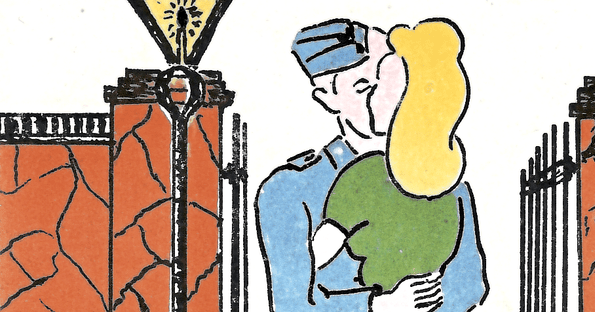 It has been common for armies in history to adopt songs as their own- almost as “theme songs” for their particular group or war. War songs range in tone and topic from the American Civil War’s “Battle Hymn of the Republic”, to “Over There”-George M. Cohan’s rally cry to American troops, to Britain’s WWI “It’s a Long Way to Tipperary.”

The adoption of WWII song “Lili Marlene”  had an interesting twist. Multiple armies adopted “Lili”- armies on opposite sides of the conflict.

The story of the song begins in 1914, as a German soldier, Hans Leip, stood guard under a lamppost and was inspired to begin a poem about a girl meeting her soldier in the lamplight.

The poem didn’t get published until 1937. It was set to music a year later by Norbert Schultze, and singer Lale Anderson performed the piece. The recordings didn’t sell particularly well, and there are stories of Nazi officials disliking it for its lack of militarism.

However, three years later, “Lili” got another chance at fame.

In 1941, during the early days fighting in North Africa, one of the operators of Radio Belgrade was hunting  through his limited recordings for more music to play for German troops. He discovered a copy of “Lili Marlene.” (According to one source, he knew that the song was in political disfavor, but also knew that a friend serving in the army had enjoyed it and decided to play it anyway.) The German soldiers enjoyed the song, requesting it frequently.

Naturally, the Allies were listening in to the German radio broadcasts to see what they were up to. The song appealed to them as well, and translators got to work. Soon, “Lili Marlene” could be heard around the front, sometimes in German, sometimes in English.

Different versions and parodies of the song appeared, some less kind to “Lili’s” reputation than others. At least one version didn’t use any of the original words- the  “The D-Day Dodgers”  only made use of Schultze’s melody.

Of course, there were some challenges in sharing a song with the enemy.  While some of the Allies- notably the American and British forces of armies like the 8th that served in North Africa and Italy- embraced the song as their own, others did not.  Stars and Stripes cartoonist and author Bill Mauldin records one incident in his book Up Front*:

“”Lili” got a couple of artillerymen in trouble in France. They were singing it at a bar the day after this particular town had been taken. Some local partisans came over and told them to shut the h— up. The guys understood, apologized, and bought drinks all around.” (Mauldin 50)

Whether as a song from home or a song claimed and repurposed from the enemy, “Lili Marlene” lives on as a part of the story of the Second World War.

Following are a couple of listening options.

This is the original 1939 German version, sung by Lale Anderson.

This English rendition is by German-born actress Marlene Dietrich, who was an American citizen by the time the war broke out. She toured extensively for the Allied effort, and also recorded the song in German. (According to IMDB she was even given the nickname “Lili Marlene.”)

If you need a third listen, Vera Lynn also recorded a nice rendition of the song.

I found the YouTube comments on these songs interesting- the strong emotional attachment people said they still felt to “Lili.” Can you think of songs that take you back to a particular era?

Next week, I’ll conclude my posts on The Battle of Midway and then…oh dear, is it going to be November already? I’m going to have to start thinking about NaNoWriMo, aren’t I…

Thank you for stopping by!

If you’re interested in checking out more of Anne Clare’s writing, click here for information on her debut novel, Whom Shall I Fear? .