As Hollywood prepares to launch Midway,  its newest big screen portrayal of a World War II battle, I’ve been reading up on the battle’s history. (Hollywood’s timing proved very convenient for me, as the Battle of Midway was the next topic I intended to cover anyway- considerate of the movie producers, wasn’t it?

While real historians and other authors have studied the battle exhaustively and can provide much more detailed accounts of the hows an whys and whos- and I’ll link to some of those sources at the end of this article- if you’re interested in a basic overview of just what the Battle of Midway entailed and why it was so important, please, read on!

In my previous post on the battle of Midway, I described the attack of the Japanese fleet against the islands of the atoll, and the attempts of the American forces based there to strike back. Unfortunately, these attempts were largely ineffective. Losses were high, and the above-ground facilities on Midway Island were severely damaged.

Japanese Admiral Nagumo must have thought things were going quite well. The goal had been to engage Midway quickly and stealthily enough that the American Navy wouldn’t be able to intervene in time, and as far as his patrols had told him, he had succeeded. Most importantly, they hadn’t spotted any American air craft carriers (not that he was expecting them.)

When his pilots radioed in that another strike at Midway was necessary, he began making preparations. The planes in the hangars would need to be rearmed with bombs (rather than torpedoes) for another ground assault. According to one source, this process would likely take forty minutes.

As they were busy at their work, new word came in.

An American air craft carrier had been spotted after all. (Oh dear.)

Now Nagumo faced a difficult choice. He needed to shift his attention to this carrier- and there might be others about. (*Reminder from last time– there were. The U.S. task forces included the aircraft carriers Enterprise, Hornet, and Yorktown. )

However, Nagumo’s planes returning from Midway needed to refuel and rearm, and there were those in the hangar being readied for the ground assault…

He made his choice- one that would greatly impact the outcome of the battle, and history.

It was therefore decided that we would await the return of the Midway attack unit and then carry out a grand scale air attack. The Fleet was advised as follows: “After taking on the returning planes, we shall proceed north to contact and destroy the enemy task force.”

(Quote from the American translation of the official Japanese battle report, courtesy of the Naval History Heritage and Command website.)

Now, it was a matter of timing. Could Nagumo get his planes in the air in time to attack the U.S. ships, or would his four carriers be caught with their flight decks full?

Meanwhile, the two U.S. task forces led by Admirals Fletcher and Spruance had been waiting quietly. As word came that the Japanese carriers had been sighted, they prepared to enter the fray.

In spite of an uncooperative wind, the Enterprise and Hornet launched their scout bombers, torpedo planes and fighters. (The Yorktown’s planes were temporarily held in reserve.)

Unfortunately, the American pilots didn’t know that their targets had moved. Upon discovery that they weren’t as alone in the sea as they had thought, the Japanese carriers had turned from their previous course.

The Enterprise and Hornet did not break radio silence to inform their pilots of this.

The Hornet’s fighters and bombers turned south, and missed the Japanese carriers completely. Exhausting their fuel, many landed in the sea.

However, the torpedo squadron from the  Hornet had become separated from the main group. Led by  Lt. Comdr. John C. Waldron, they turned north and discovered the enemy carriers.

They flew in to attack, alone and unsupported by any fighters. Overwhelmed by Japanese planes and aniti aircraft fire, one by one, the torpedo planes fell.

Of fifteen planes, none returned home.

Though his plane did not survive, one pilot did. Ensign George H Gay’s plane crashed after attacking the  Kaga.  Floating close beside the  Akagi, Ensign Gay concealed himself under a floating seat cushion, and hid, witness to the attacks. Not until night fell did he inflate his life raft and escape. 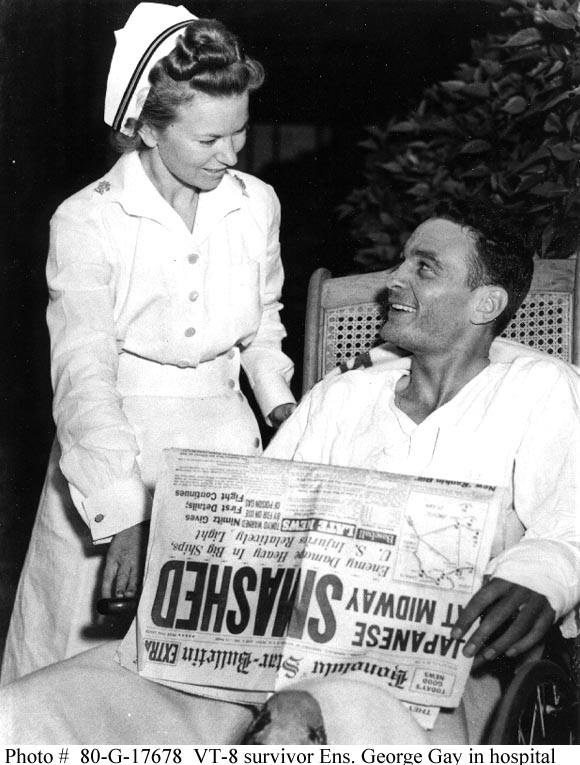 Less than an hour behind the  Hornet’s torpedo squadron, came the  Enterprise’s torpedo planes. Like Waldron’s squadron, these planes came in without fighter protection, having lost their escort enroute.

As they approached, the Japanese carriers adjusted their course, forcing the planes to come in on a long, slow curve, exposed to Japanese fighters and anti aircraft fire. It’s unlikely that most of them even had a chance to drop their torpedoes.

To prevent the reserved planes of the Yorktown from being caught helpless on the flight deck, they’d been launched at about 8:45. Led by led by Lt. Comdr. Lance E. Masse, their torpedo planes attacked at about the same time as the Hornet’s.  Unlike the previous attackers, the Yorktown’s pilots did have some fighter protection…at first. However, they were quickly engaged by enemy aircraft, and yet another torpedo squadron began its approach alone. The combat narrative sums up the attack.*

“From a point about a mile east of an enemy carrier the squadron commander turned in for the attack. As he turned he was shot down in flames by an enemy fighter, but the remainder of the squadron pressed on. Six more fell on the way and only five remained to launch their torpedoes. Three more fell a moment later.” (pg. 23)

In spite of these heavy losses, these attacks saw some success. Of the three carriers under torpedo attack, all had been hit. Also, the valiant efforts of the torpedo planes had two results that had a huge impact on the battle.

First, the Japanese carriers, busy maneuvering, could not launch their own bombers.

Second, the Japanese fighters were flying low, focused on the torpedo attacks.. They were unprepared for the approach of the high-flying U.S. dive bombers.

Dive bomber pilot Lt. Comdr. Clarence W. McClusky,Jr. – leader of the Enterprise air group- is credited with making “the most important decision of the entire action.” (Comabat Narrative, pg. 23) When the Japanese carriers were not where he expected them to be, he turned north.

Before long, he found them.

Spotting all four carriers, the Enterprise pilots attacked the westernmost two. They met very little opposition until after they’d dropped their bombs and scored at least eleven direct hits.

Simultaneously, the Yorktown‘s dive bombers attacked the carrier to the east. Scoring at least five direct hits, they wreaked havoc on the carrier’s flight deck.

As the surviving U.S. planes returned to their respective carriers, Nagumo’s powerful fleet was left with three carriers hit and in flames (the fourth, the Hiryu withdrew, undamaged) as well as several other ships damaged or sunk.

Things were looking up for the Americans, but the planes that returned to the Yorktown didn’t have much time to celebrate. They were quickly warned to take off again and head over to the Enterprise.

Japanese forces were headed to attack the Yorktown.

And that’s where I’ll close today. If you’re interested in more information on the Battle of Midway, please do check out my first and third posts on this topic:

The Battle of Midway Part I: On the Screen and in History

The Battle of Midway Part III: The Sinking of the Yorktown

As you can see, there’s a lot of material here- and I’m only trying to do a quick overview! How Hollywood’s going to squeeze the events of Pearl Harbor and Midway into a film…well, we’ll see how they do!

Here’s the teaser trailer for the upcoming film, for those who are interested.

After I posted my first Midway article, a couple of other authors shared their own articles on the topic with me. They make great further reading! Here is a blog post from the International Historical Research Associates Site, and one from Dave Scheirer with links to ALL sorts of sources (including some film footage from the actual battle.)

What about you? Are you a lover of history who’s itching to share more facts about this piece of history? Are you a film lover (or maybe a bit of a skeptic?) waiting to see if the movie is worth the ticket? Or are you just stopping by?

Whatever the case, thanks for stopping by, and I’d love to hear your thoughts in the comments below!

*As the Combat Narrative is saved as an online pdf, I am unable to add a direct link- however the links I provided will take you to the Naval History and Heritage Site with the pdf link on it.

If you’re interested in more of my writing, click here to check out the WWII historical fiction novel that I released this June.

23 thoughts on “The Battle Of Midway Part II: The U.S. Aircraft Carriers Enter the Battle”