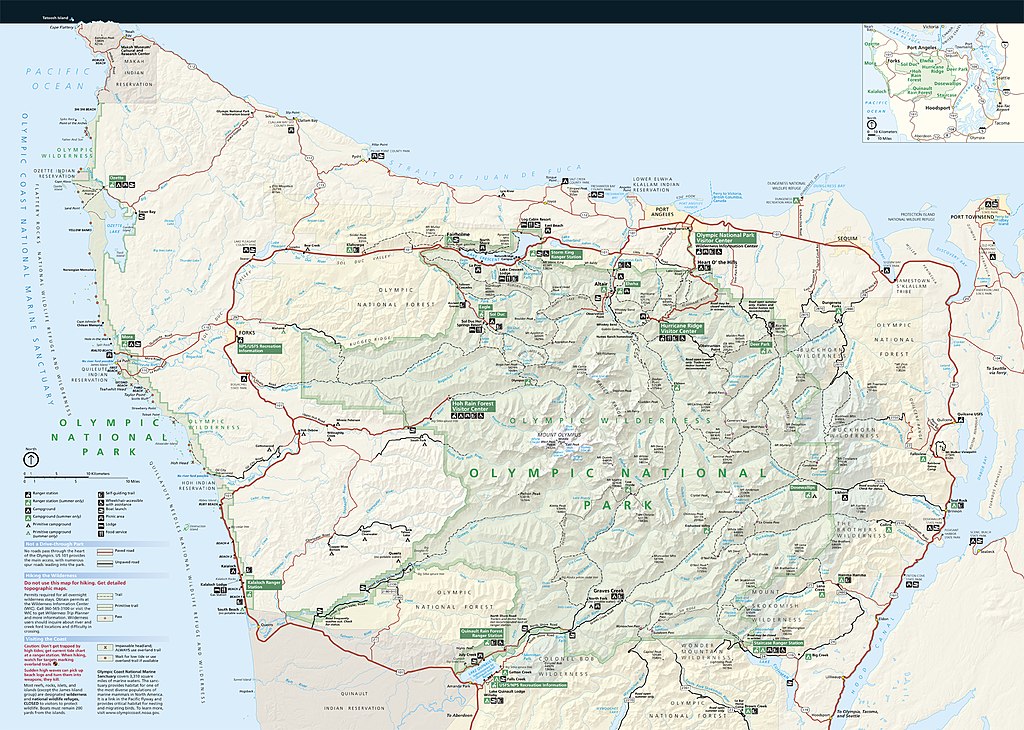 Local wisdom says that residents of the Pacific Northwest should expect gray, rainy weather up through the fourth of July- then summer sunshine will officially begin.

This year hasn’t worked that way. Summer visited a couple of months early when I was expecting drizzle, and then (maybe embarrassed by the mistake) it hid itself away until I wondered if it were going to show up at all this July.

Thankfully it did, and a stretch of a few beautiful days combined with a family visit enabled the Clare crew to get outdoors for a visit to Olympic National Park!

Located on the Olympic Peninsula of Washington State (across Puget sound from Seattle, if that’s a useful reference) the park covers over 1,400 miles of diverse landscape. From 65 miles of Pacific coastline, (passing near Forks, WA, of sparkly vampire fame) to the temperate Hoh rainforest, to the snowy peak of Mount Olympus, there is plenty for the nature enthusiast to enjoy.

With such a massive park to explore, day trippers like ourselves have to choose a location or two to focus on.

For this excursion, we stuck to the northeastern side of the park and visited the spectacular vistas of Hurricane Ridge.

While we enjoyed views of the Olympic Mountains as we drove along the peninsula through Sequim and Port Angeles, there’s no view of these peaks quite like the one from Hurricane Ridge. The well-paved but winding road hugs the hillsides, offering views of the water, the forests, and the mountains as it climbs to 5,242 feet above sea level.

The views from the road are gorgeous, but as I’m not fond of heights and I spent most of the drive clutching the van’s armrests with white knuckles, (because that’s really going to help) all of my pictures are from the top.

The visitor’s center has interesting and informative displays on local plants and wildlife, and rangers willing to direct visitors to the hikes best suited to their ability, as well as restrooms and food and knickknacks for purchase.

But who could spend too much time indoors here?

Most of the hiking trails start across the parking lot from the lodge. The ridge really is fairly narrow, with one side facing the Olympics…

…while the other faces north, to the Strait of Juan de Fuca- Puget Sound’s access to the Pacific- and Canada.

We weren’t looking for a long hike, which was just as well. Some of the trails were limited access due to an interesting difficulty the park has run into. This quote from the park’s 2019 summer newspaper, The Bugler, sums it up well.

“Goats addicted to Human Urine Airlifted Out of National Park.” Variations of this headline spread around the world as new outlets picked up the story of Olympic’s mountain goat translocation in September of 2018.

Mountain goats are not native to the Olympic Peninsula, but in the 1920’s- before the park was founded- a dozen of them were introduced by a group that planned to use them for hunting.

Nature took its course, and the goat population peaked at over a thousand. As the Olympics contain none of the natural salt licks that the goats crave, some of them took to following around the saltiest objects they could find- sweaty hikers and any “deposits” they left behind. Unfortunately, some of the goat have exhibited aggressive behavior- one hiker was killed in 2010.

On top of danger to people, there’s danger to the Olympics’ ecosystem, which is home to some plants and animals found nowhere else in the world.

In an attempt to solve the problem, the powers that be decided to try to relocate the goats to the Cascade Mountains further east, where they belong.

I was surprised to hear that this was going on again. A ranger a few years back told us about her experiences trying to do this very thing, and how the effort had to be abandoned because of the danger to the rangers who were having to jump out of helicopters onto sheer cliffs to get knocked-out goats rigged up for airlifting. Hopefully this time around, the people in charge figured out a better way to manage the relocation.

In any case, we were able to find some beautiful vistas, without any aggressive goats in sight.

The clouds returned the next day, but we enjoyed our excursion- I hope, through these pictures, that you did, too!

Have you had any summer adventures? Found any new places to explore?

Thanks for stopping by!

Probably my biggest adventure this summer (as I didn’t have to fight off any goats) was the publication of my first novel. It’s been humbling to read the kind reviews that I’ve received so far.

If you’re interested in checking it out, it can be found here, on amazon.com, for Kindle or in paperback.