Pretty hard, actually, but I’ll get to that in a moment.

Welcome to the second of my series of special posts, counting down to my WWII historical fiction novel’s debut next Friday, June 28th!

First of all, here’s a look at the second of three prize packages in my celebratory giveaway.*

While planning these prizes, I enjoyed trying to find little artifacts that tied into my story.

The card in plastic at the top right of the picture relates to the military aspect of my novel, so today I decided to focus on one of the highest writing hurdles I faced: trying to accurately portray my characters’ army experiences, even though I’ve only ever been a civilian.

(Did you ever hear that advice, “write what you know” from your teachers? I did, but I guess it didn’t stick…)

Sure, I have close friends and relatives who serve and have served. I’ve lived in a military community for a number of years. I’ve nearly gotten lost on base a couple of times (it’s hard not having a sense of direction.)

Still, if I were going to tell the story I wanted, I needed to learn enough to tell it well.

I gathered some resources, took a deep breath, plunged in…

…and promptly hit my first wall.

I had put my main character in the wrong Army.

You see, I wanted to set my story in a theater of WWII that I didn’t already know much about. It would be an opportunity for me (and, hopefully my readers) to learn and explore something new.

Closes eyes, points at a map- guess what, James? You’re shipping out to North Africa, then Italy!

I was excited about my choices. North Africa! He could be involved in the struggles in the North African desert, against Rommel and his tanks! And then I could send him through Sicily and into Italy. I’d never heard much of anything about either campaign in school, and it all sounded fascinating.

I looked over military groups that were there, and decided to put him into the British 8th Army. As the 8th Army served in both locales, I could just “follow” them through my histories and make sure that my fictional friend was in the right places at the right times.

I know, I know, obvious, right? Maybe it’s just because I’m a small-town girl, but I honestly didn’t realize the sheer SCOPE of an army’s movements until I tried to track a logical path for one little component of it.

Struggling to make certain that his movements were at least plausible, I discovered that most of what I’d found wouldn’t work anyway, because the 8th army was restructured after North Africa.

It was almost an entirely different group when it moved on to Sicily and Italy. And the timeline I’d mapped out didn’t work, because the Allies didn’t have control of the Mediterranean and he’d have to sail south around Africa, and that would take too long…

I had to rethink everything.

In the end, what it really came down to was structure. I didn’t fully understand military structure, and without that framework, nothing else worked.

I also really needed a smaller group to work with.

From following an entire Army group, I scaled down to a Division.

The 78th, or “Battleaxe Division” fit the bill- they’d gone through North Africa, though from the opposite direction than I’d originally planned. They were also present in Sicily and Italy (where they became part of THAT version of the 8th Army.)

I grabbed a 78th Division history, ready to get going.

Guess what? Divisions are pretty big too- ideally over 18,000 men, though many of them were running low as the war went on.

Needing to narrow things down further, I looked for a brigade that might do. The 11th? It was still too big. But a battalion- that might be manageable.

After a little more research, James and his platoon unofficially joined the 2nd Battalion Lancashire Fusiliers.

The Lancashire Fusiliers had distinguished service through North Africa in Operation Torch, through Sicily (around which time the Allies gained control of the Mediterranean, conveniently fixing my story’s timeline), and up all the way to and through Italy.

While I was grateful to have figured something out, it seemed presumptuous to tack my group of fictional soldiers on to a real group who lived and served and sacrificed. Because of this, in the novel I don’t go into these details- I kept the connection in my own mind.

However, being able to reference detailed accounts of the actual military groups helped me to not only add authenticity to my work of fiction, but (I hope) to pay homage to the sacrifices of the real people who served.

In the end, my take-away from the experience is this: Whether writing about the military or another unfamiliar topic, creating a quality story takes time and digging to make certain that the final product is as true as possible.

I hope that readers feel that my efforts paid off in the final story. 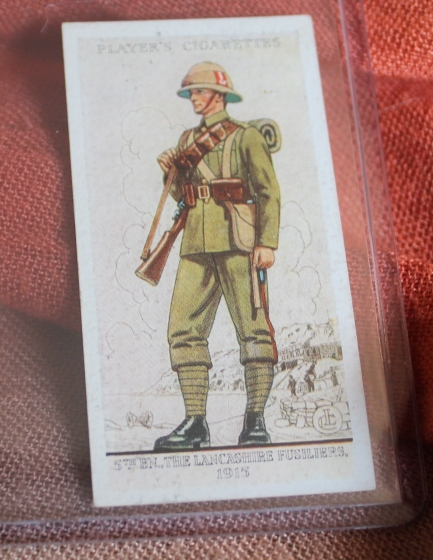 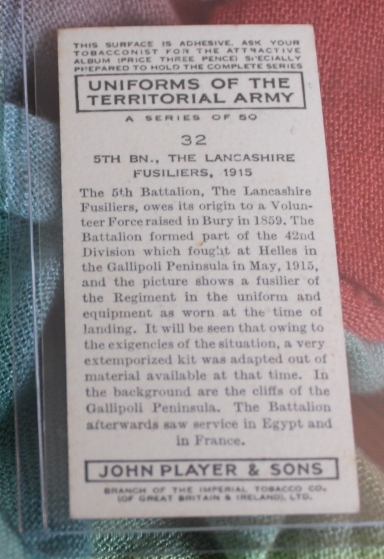 Now, back to that little card. If you can read the fine print, you might have already guessed why I had to pick up this item.

Cigarette manufacturers of the late 1800s were concerned about their products being bent or broken. To prevent this, they placed rectangular “stiffeners” of cardboard into the flimsy paper packages.

That blank cardboard became an excellent marketing opportunity. Rather than leave it blank, companies began printing cigarette cards with an illustration on one side and information about it on the back.

Cigarette cards might feature images of famous actresses or politicians, sports figures or tourist attractions. As wartime approached, some took a practical bent, with instructions for air raid precautions and similar topics.

In a time when few could travel and educational opportunities were limited, these colorful, informative cards became extremely popular. People scrambled to collect entire sets of 25 to 50 cards each and kept them in special books.

The particular cigarette card I found is from a series featuring “Uniforms of the Territorial Army” from WWI. This card shows a member of the Lancashire Fusiliers from 1915. The war and the battalion number are different, but I couldn’t resist the connection.

The date of the card is also significant: 1939. It is both the year that World War II began and the year that the cigarette card craze died.

With shortages and rationing, printing millions of paper cards was no  longer feasible for British cigarette companies, and the craze never came back- at least not to the same degree.

The last little item in this prize pack is another vintage postcard asking the question that posters all over British train stations asked civilians who might be tempted to fill up trains needed for troop movements: “Is Your Journey Really Necessary?”

I would love to give these items away, along with a free e-book copy of my novel Whom Shall I Fear? and a $10 Amazon gift card to use as the winner pleases.

*If you’d like to enter the drawing to win one of the giveaway prizes, answer the “Question of the Day” either in the comments here, on Twitter @anneclarewriter (make sure you tag me!) or on my Facebook Author Page.

-Up to one entry for each “Question of the Day” per participant!

-Entrants under 18 years of age must have parental permission.

-All entries will be counted at noon PST on Thursday, June 27th. No entries after this time will be accepted.

-Winners will be announced on June 28th on this site.

–This giveaway is in no way endorsed by WordPress or any other online entity- it’s just a “thank you” from me!

Question of the Day: Let’s see if YOU know military structure better than I did. How should these military organizations be arranged, from largest to smallest?

D. Anne, I’m not sure, but I’d like to enter the drawing anyway.

If you didn’t answer yesterday’s question, feel free to check out my post on the Red Cross and and leave a comment!

Whether you’re eligible for the drawing or not, I’d love to hear from you. Are you a writer? Have you run into tricky topics to research? Are you a reader who has run into topics you wish were researched a bit more?

In any case, thank you so much for visiting! There won’t be a new post on Sunday, but I’ll be back on Monday with the third prize package, and some more history to share!

If you’d like more information on cigarette cards, I found these sites helpful in preparing today’s post:

If you’re interested in having a copy of my debut novel in your inbox on its launch day, June 28th, it is available for pre-order! (The paperback isn’t pre-orderable, but it will be available on the 28th as well!)

1943
All that Sergeant James Milburn wants is to heal. Sent to finish his convalescence in a lonely village in the north of England, the friends he’s lost haunt his dreams. If he can only be declared fit for active service again, perhaps he can rejoin his surviving mates in the fight across Sicily and either protect them or die alongside them.
All that Evie Worther wants is purpose. War has reduced her family to an elderly matriarch and Charles, her controlling cousin, both determined to keep her safely tucked away in their family home. If she can somehow balance her sense of obligation to family with her desperate need to be of use, perhaps she can discover how she fits into her tumultuous world.
All that Charles Heatherington wants is his due. Since his brother’s death, he is positioned to be the family’s heir with only one step left to make his future secure. If only he can keep the family matriarch happy, he can finally start living the easy life he is certain he deserves.
However, when James’s, Evie’s and Charles’s paths collide, a dark secret of the past is forced into the light, and everything that they have hoped and striven for is thrown into doubt.
Weaving in historical detail from World War II in Britain, Italy and Egypt, Whom Shall I Fear? follows their individual struggles with guilt and faith, love and family, and forces them to ask if the greatest threat they face is really from the enemy abroad.

8 thoughts on “Writing About the Army as a Civilian- How Hard Could It Be?”