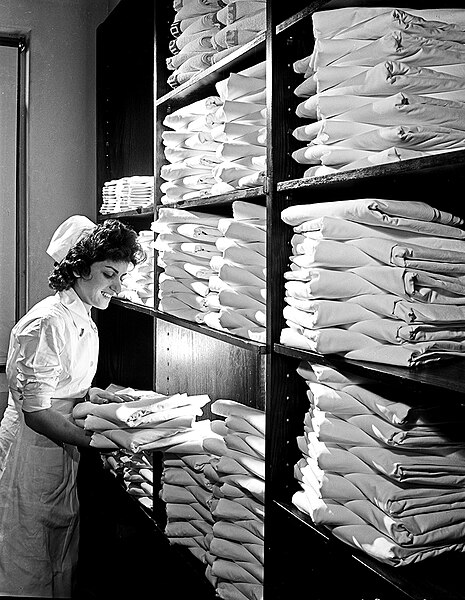 In the post-Depression United States, nursing wasn’t considered a particularly “nice” job for young, unmarried women. Still, in an uncertain world where jobs were scarce and educational opportunities limited, a nursing career offered a certain amount of security.

With the onset of the Second World War, “secure” became a less apt word for a nurse’s life. After the Japanese invasion of the Philippines, the U.S. nurses stationed there struggled to care for troops. When surrender became inevitable, some were evacuated. Others continued their duties as prisoners of war.

On the home front, the US Army Nurse Corps began recruiting. Nurses had to decide whether they would continue to serve at home or take the risk and sign up to serve abroad.

Women like Ruth G. Haskell chose the later, though with mixed emotions. In her book, Helmets and Lipstick, she shares her reaction to receiving THE phone call.

“Foreign Service! I had volunteered about a month before, but now that the orders were actually here, I found I was a little panicky about the whole thing. It was a thing we all talked about but thought of as being in the dim, dark future.” (Haskell 9)

Helmets and Lipstick records Ruth Haskell’s experiences as an Army Nurse from that first phone call to her return home.

First published in 1944, not only is Helmets and Lipstick a fascinating and often poignant first-hand glimpse into the work of nurses during WWII, it also gives an amusing look at army life from an outsider coming in.

Haskell shares how, after finding their way to the correct army base (which took some doing) she and her travelling companions had to make it through the inoculation assembly line, figure out what a mess kit and bedroll were, and then receive their very own helmets.

“As we entered the room, a smart-looking corporal planked a helmet down on my already aching head, grinned, and swung me around to the mirror. Ye gods, I knew I wasn’t anything to look at, but the face I saw reflected there was enough to scare children.” (Haskell, pg 21)

She guides readers across the Atlantic, through the fun of socializing on-ship, the discomfort of seasickness, and the tension of watching escort ships fire on enemy submarines.

Upon reaching the U.K., Haskell got her first taste of the physical training she and her fellow nurses would be expected to do during their stay.

“We glanced around, and it was really laughable to see the various girls rubbing aching muscles here and there, with weird expressions on their faces. Some of us had used muscles in that last twenty minutes that we hadn’t even thought of since we so painstakingly learned about them in training days.” (Haskell, pg 59)

Physical fitness would serve them well, however. Haskell’s group of nurses was slated to go over with U.S. troops in Operation Torch, the invasion of North Africa. They would be some of the very first American women sent into a combat zone.

Sailing through the Strait of Gibraltar, Haskell and the troops she would be caring for landed near Oran- or they meant to. Like many of the landing craft of the day, which had limited navigation abilities, theirs ended up off course.

Her impressions of the landing are memorable.

“There was the rasp of metal against metal, the back of the barge was dropped, and the enlisted men stepped off into the water.

I gasped as the first man almost entirely disappeared- the ocean coming up to his armpits. Then one of the taller boys stepped off and turned around.

“Let me have your hand, Lieutenant Haskell,” he said. “Maybe I can help a little!”

I took one look at the swirling sea and reached for him, stepping off the barge at the same time. I shuddered as the ice cold water began seeping through my heavy clothing.

As I reached the sand, the weight of my pack became apparent and my poor old back began aching. I staggered over a stretch of beach and dropped down under the steps of a cottage about a hundred yards away. It was then that I heard for the first time the ping of a sniper’s rifle which, on this occasion, kicked up a chunk of sand on the path along with I had trodden.” (Haskell 99-100)

Helmets and Lipstick continues across North Africa, through filthy, makeshift hospitals, through first Christmas celebrations away from home, through the advances and panicked retreat, and through Haskell’s eventual evacuation.

Readers, if you’re looking for a book that serves as a remembrance of the nurses whose service should be remembered, Helmets and Lipstick is an excellent choice.

What about you? Have you found any interesting stories from history lately?

While writing fiction about these days honestly seems superfluous when there are all of these amazing TRUE stories to be found, for those who are interested, I’ll be sharing some updates on my own upcoming book in the next few days including…a cover reveal!!!