It was the site of the surprise attack that galvanized the U.S. into full participation in the Second World War.

Within its peaceful blue waters, the wrecks of the USS Arizona and USS Utah rest as quiet memorials and tombs.

The marble pillars memorializing the lives lost on the USS Oklahoma stand straight and tall, evoking the image sailors manning the rails.

On our recent visit, we had the opportunity to visit one more major piece of history- the USS Missouri, the ship on which World War 2 officially ended.

The USS Missouri in WWII

She was sent to the Pacific, providing support for multiple airstrikes and for the invasions of Iwo Jima and Okinawa.

On April 11th, during the invasion of Okinawa, the Missouri was struck by her first kamikaze pilot. The ship suffered minimal damage, and no American lives were lost.

However, the Japanese pilot’s body was discovered in the wreckage.

While some were ready to wash the body overboard, Captain William M. Callaghan ordered that the pilot receive a proper burial at sea. The Missouri‘s crew sewed a Japanese flag to drape the body, and the pilot’s was “commended to the deep” with a Marine volley in salute.

On September 2, 1945, a Japanese delegation came on board the USS Missouri to sign the official documents of surrender, ending the Second World War.

Below is a video I found through the Missouri’s website with actual footage of the surrender. If you have 8 and a half minutes, it’s well worth a watch.

Visitors to the Missouri can see remembrances of this historic day first hand. 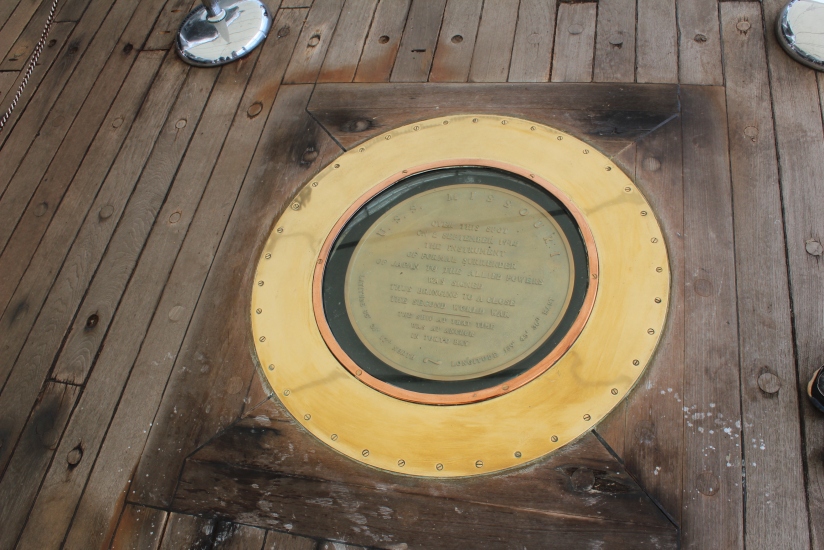 Embedded in the teak-wood deck, this circular plaque reads:

Over this spot on 2 September 1945 the instrument of formal surrender of Japan to the Allied Powers was signed, thus bringing a close to the Second World War. The ship at that time was at anchor in Tokyo Bay. 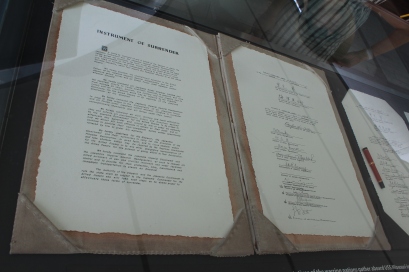 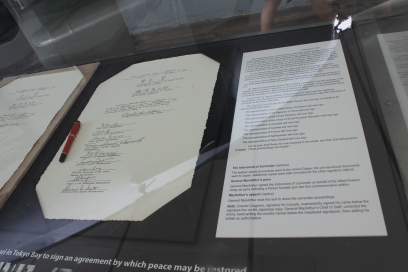 Nearby, the surrender documents are displayed under glass.

Above these hangs an American flag, faded with age but with a unique place in history. 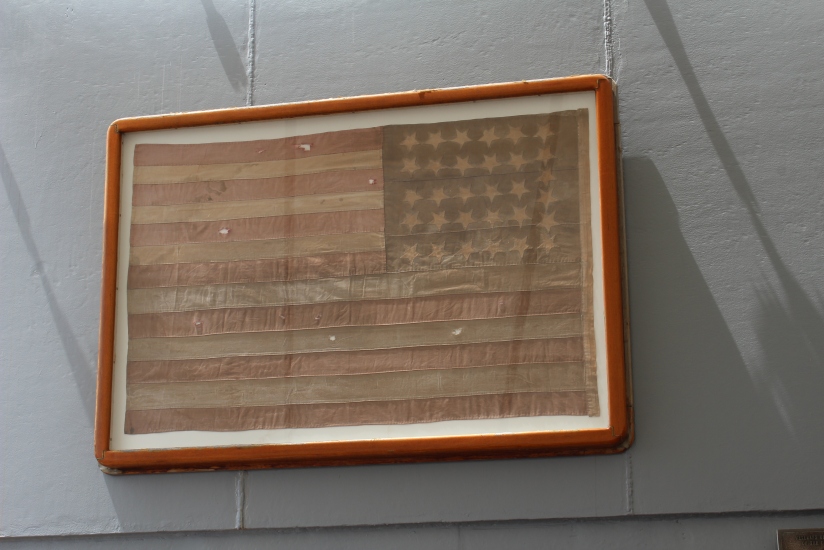 The flag was General MacArthur’s special request. He wanted the flag that Commodore Perry flew when he first sailed into Tokyo Harbor in 1853 onboard the Missouri for the signing.

This flag was hung on the “surrender deck” to mark the event as American ships sat in Tokyo Harbor once more.

The flag that is currently displayed is not Perry’s flag, but our tour guide indicated that it might be a contemporary.

While it was a tremendous place to visit, the surrender deck is only a small part of the Missouri that is open to the public. (This is a good thing too, in my opinion since, unlike the Arizona, the Missouri tour was NOT free. We were very fortunate to be able to get discounted tickets through friends.)

As we were working hard to keep our three children from getting lost in the labyrinth of rooms, I don’t have pictures to share, but if you are fortunate enough to visit the Missouri, you can look forward to seeing inside the gun turrets and exploring below decks where the winding paths through the crew’s quarters, galleys, and other compartments include fascinating exhibits and artefacts.

Exhibits cover not just World War 2 history, but also the Missouri’s many voyages and service during the Korean War and Operation Desert Storm.

Not Just Used as a Battleship

The Missouri was “mothballed” from 1955 until 1984, when she was modernized and set sail again.

She was decommissioned (for the second and final time) in 1992, but she’s still had some…interesting uses.

In 1989, the USS Missouri was the backdrop for Cher’s music video “If I Could Turn Back Time.” I was a little surprised to see that this fell during the Missouri‘s active service time. Maybe Navy recruitment was low and they felt they needed some promotion?

We were told before our tour that we couldn’t climb on the guns, just in case Cher gave us ideas. Here’s the video if you’d like to watch it, but be warned, the costuming is…well, …I didn’t know fishnets could go up that high…

The USS Missouri also featured in the 2012 film Battleship. No, we didn’t see any aliens on board.

This clip may have spoilers. I haven’t seen the whole film. Also, I feel like they MAY have taken some liberties with a battleship’s capabilities, but hey, feel free to correct me, Navy folks 😉

As far as practical matters like shopping and sustenance go, outside the ship there are opportunities to spend at the gift shop and a food stand or two (though be aware, their pricing mirrors the Missouri’s- if you can get the family to wait and eat at the car, your wallet will thank you!)

There’s also a vintage looking Quonset-hut-style dining building, complete with ads and comics from the 40s adorning the walls and very pushy pigeons looking for scraps. 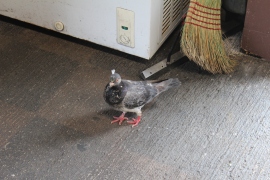 Visitors exit past statues of the famous V-J day kissing couple and Admiral Nimitz, rows of flags, and photo-opportunity displays.

Even sans crashing planes, starlets and aliens, the USS Missouri was a fascinating stop.

I think General MacArthur’s closing comments at the surrender ceremony are a fitting end to this article. They’re a reminder that yes, monuments like these remind us of losses and bloodshed and suffering, but they also remind us of what we should all work and hope for- peace.

“Let us pray that peace be now restored and that God will preserve it always. These proceedings are closed!”

I hope you’ve enjoyed these little tours of the memorials of Pearl Harbor- many thanks for visiting!

Next week my focus will be shifting a bit, as I have some exciting writing adventures on the horizon that I can’t wait to share with all of you.

16 thoughts on “The Ship Where WW2 Ended: Exploring the USS Missouri”