The memorial to the USS Arizona is the most well-known and easily accessible in Pearl Harbor, Hawaii.

However, it isn’t the only one.

The attacks on December 7, 1941 which launched the United States into Word War 2 did a great deal of damage and made complete losses of three battleships: the USS Arizona, the USS Utah and the USS Oklahoma.

While the Arizona memorial is open to the general public, memorials to the Utah and Oklahoma are on Ford Island, which is still used by the military as part of Joint Base Pearl Harbor-Hickam. To see these memorials, one needs special permission OR (as we were fortunate enough to have on our recent visit) military friends stationed in the area who will act as an escort.

Unlike the busy Arizona memorial, the resting place of the Utah is rather lonely and unassuming. Our party had the little parking area to ourselves.

By 1941 the Utah was already past her prime. Launched in 1909, she served in WWI. She was demilitarized in 1931 and repurposed as a target ship for training.

The Utah was on the opposite side of Ford Island from the Arizona and other prime targets for Japanese planes. Just why she ended up having six torpedoes fired on her is an open question. Perhaps it was a case of mistaken identity.

Whatever the reason, sixty-four of the training ship’s officers and crew were lost.

It might have been more if Lt. Commander Solomon Isquith hadn’t organized a rescue crew when he and others who’d escaped heard the frantic knocking on the hull of survivors trapped inside.

Braving the Japanese planes still strafing the harbor, they returned to their sunken ship to cut the hull open and save those they could.

The Utah was never salvaged, and still rests in Pearl Harbor, entombing those who went down with her.

The original Utah memorial was a plaque on the wrecked remains. 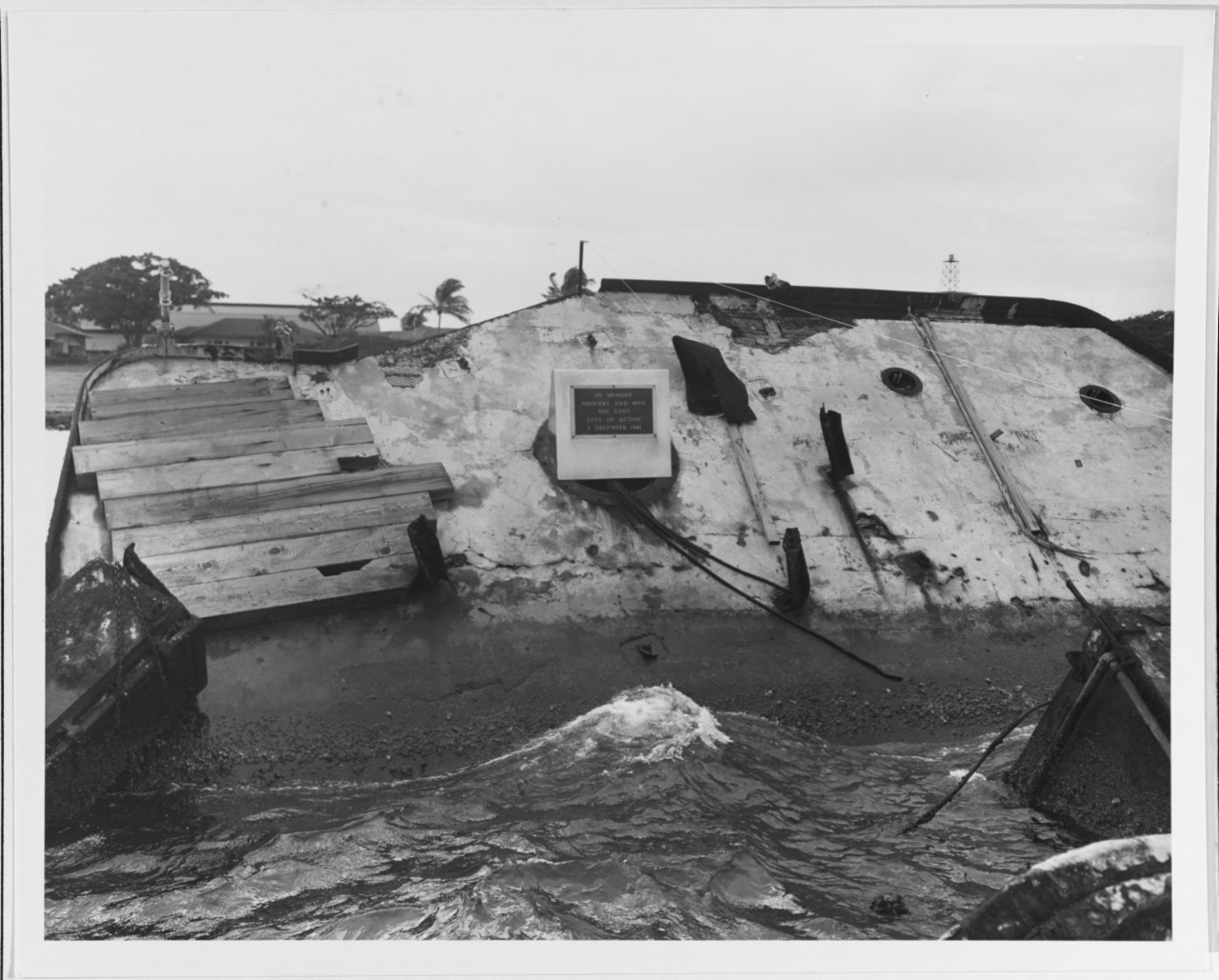 A new memorial was built in 1972. The simple white structure offers a close view of the ship’s remains. Below the raised American flag, a plaque commemorates those who were lost.

Like the Arizona survivors, survivors of the Utah have the option of having their ashes returned to the ship upon their passing, to join those who never left.

Unlike the Utah, the USS Oklahoma was still a fully active battleship. On the morning of December 7, 1941, she was tied up just down Battleship Row from the Arizona.

Struck by at least 9 torpedos, it took only 13 minutes for the Oklahoma to capsize. Sailors tried to evacuate over the starboard side, but as she rolled over hundreds were trapped inside.

There are many stories of bravery from the Oklahoma’s tradgedy- honors given to her crew include 2 posthumous Medals of Honor and one Navy Cross.

One award particularly caught my eye, as it was given just two years ago.

Father Schmitt had finished morning Mass and was reportedly hearing confession on board the USS Oklahoma when the first torpedos hit. He assisted twelve sailors to escape through a porthole.

When he attempted his own escape, he became stuck.

Hearing other sailors in the compartment behind him, he insisted on being pushed back into the doomed vessel, so that others could escape.

His remains were identified recently, and his family was awarded his posthumous Silver star in 2017.

Those who escaped the Oklahoma worked frantically for days to cut through the ships hull to rescue trapped survivors.

In spite of their best efforts, they were only able to rescue 32. All told, the Oklahoma suffered 429 losses- the second highest loss of life after the Arizona.

429 white marble pillars stand at the Oklahoma‘s memorial, one for each life lost. 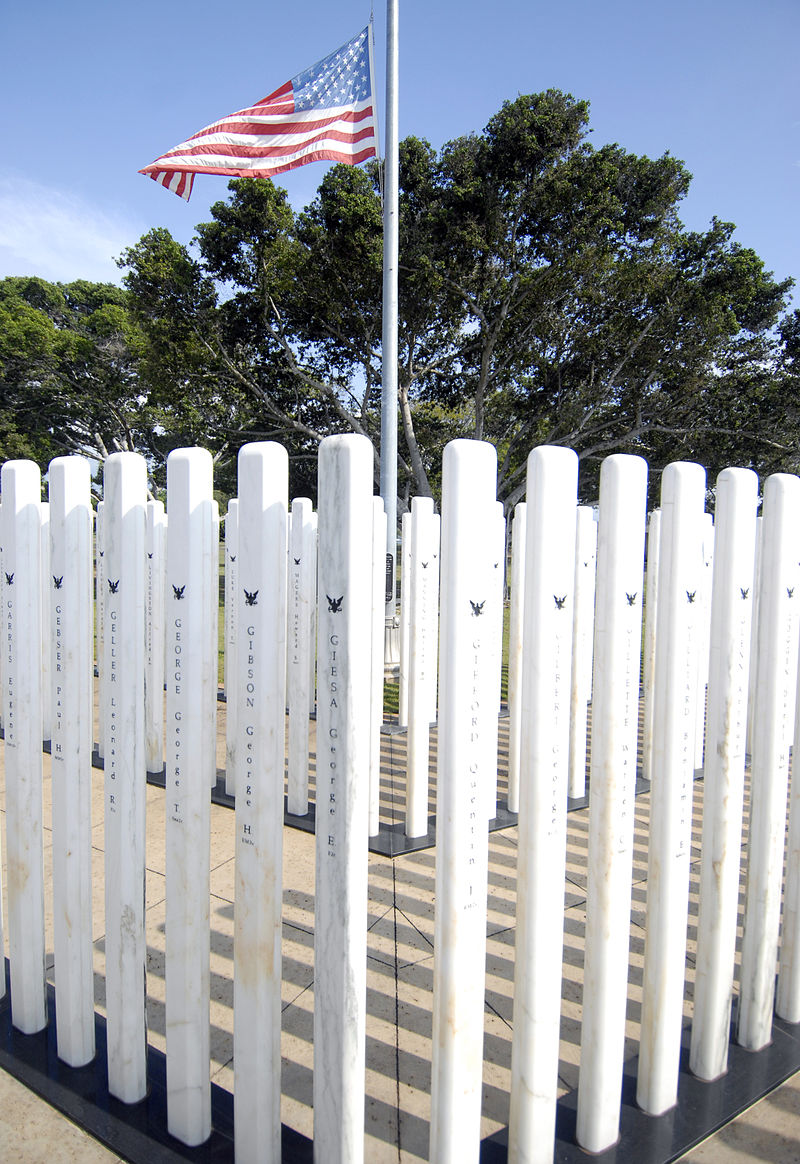 A black stone marker at the memorial sums up the meaning of the place best. A portion of it reads:

As Navy vessels pass through Pearl Harbor, sailors and marines stand at attention along the ships railing and superstructure. The crew’s dress uniforms contrast sharply against the grey vessels.

In full dress uniform, the ship’s crew stands at attention in a display of respect and honor- coming home for a final time by manning the rails.

The USS Oklahoma no longer rests in Pearl Harbor.

The Navy attempted to salvage her, patching and refloating her. However, the damage was too great. The Oklahoma was decommissioned in 1944. According to another plaque at the memorial:

Sold for scrap, she was en route to the west coast when she mercifully broke her tow and sank on 17 May, 1947.

I’m grateful to have had the solemn privilege of paying my respects at these memorials. If you ever have the opportunity, I would absolutely recommend a visit.

There is one final major memorial in Pearl Harbor that we visited, one with quite a different atmosphere than the three I’ve written about.

Next week I’ll share our visit to the ship on which World War 2 ended, the USS Missouri.

As always, many thanks for visiting!