I’m a sucker for a good story, be it fiction, non-fiction, or something in between. Getting to read a great book before everyone else- that’s just a bonus!

My new friend, Vanessa Rasanen, was kind enough to let me be one of her early readers for her debut novel Soldier On, which she just released this week. (Congratulations, Vanessa!) She was also kind enough to make The Naptime Author a stop on her blog tour.

Today, she’ll share a glimpse into that wild and winding path known as Self-Publishing.

Thanks for visiting, Vanessa!

First off, I always like to hear about an author’s inspiration. Where did you come up with the idea for your novel?

I’ve been working on this story for so long the initial inspiration may be lost to my ever-worsening mom-brain. There may be some assumption from readers that my Afghanistan deployment setting is pulled from personal experience.

That assumption is correct.

I can’t deny it. Obviously, the characters and their backstory are not my own, but my experience with a military deployment*–and all my emotions that went with it–was a strong driver for the story.

My imagination ran from there.

(*Vanessa’s husband is a medivac pilot with the U.S. Army National Guard.)

Those sounds like some pretty powerful experiences to draw from. Once you had your story in mind, what did your writing process look like?

I think we all have this romanticized image of what it looks like to write a novel. Perhaps some authors fit well into that vision. I did when I first started getting the story down. We had two kids at the time, and I would get up at 5 A.M. a few days a week and drive to the only coffee shop open that early and write. I had a playlist of music–to help set the tone and get me into the scene–and I’d try to get words on the screen.

Coffee shops sound like great places to write. They aren’t. Not for me. I’m too distractible. The shop I frequented (closest to our house) had an awful layout, and every time someone came or went a blast of morning air would rush in. I had a hard time not people watching. It was hard to hit my word counts.

The story went on and off my proverbial shelf for years, and each time I picked it up, I honed my writing process. I’ve finally discovered what I need in order to write: a closed room in our basement in the early morning–sometimes as early as 3am, since our kids are also early risers.

I still have to have music (though the songs have changed a bit over the years). I am a plotter, absolutely. I can’t stand too messy of a draft, which makes sense given my day job as a data analyst and my background as an engineer. I have outlines and timelines and random plot ideas scattered across notebooks and scraps of paper.

Once I got the first draft done, I let it rest for a week, then jumped into self edits. This meant re-reading, starting from the end and editing backwards, checking for plot holes, revising phrasing, adding details where they lacked. I had a slew of beta readers who helped me find spots that need clarification or cleaning up, and fixed spots where a reader guessed the twist too early.

It’s not a glamorous process. It’s hard. It’s grueling. But it’s so rewarding!

I have to say, having read the story, I can see that all of that hard work paid off!  So, what led you to choose self-publishing?

I had initially planned to get an agent and seek traditional publishing. I researched and made lists of agents to query. At one point I did submit it to a small publishing house. It didn’t pan out, and looking back, the book wasn’t ready. Not by a long-shot.

The book sat untouched for two years while I was battling postpartum depression. When I finally came back to it, I started looking at my publishing options again. The publishing world had changed a lot, too.

Did you have any doubts about changing directions?

I was hesitant to self-publish. I was. I was stuck in this mindset that self-publishing had this negative reputation–and it certainly does still have this reputation, unfortunately, in some circles.

As I met others who were going this route, though, I found it wasn’t just a fall-back option. It was the path I wanted for my own writing.

We laud and support small business owners all the time. We love to buy from friends and local families who run businesses on etsy or in their own shops. What I learned was there was a growing population of writers who were applying these entrepreneur skills to their writing and publishing.

As a self-publisher we own our own small business. We hire professionals to handle the pieces we may not have expertise in–designers, editors, proofreaders, etc. We write. We market. We network. We run our business. I love having full creative control over my work. I get to choose who I hire, what I write, and when I publish. It’s overwhelming at times, but I can’t imagine doing this another way.

That creative control is enticing, isn’t it? Now that you’ve gone through the process once, do you have any wisdom to share?

Overall, everything has gone fairly well. My biggest piece of advice is to roll with the punches as best you can. Nothing goes perfectly. Something will go wrong. You’ll hire the wrong freelancer. You’ll waste money on something you didn’t need. You’ll have people who don’t like your book.

Roll with it. I believe it was Chris Fox I saw who said “fail faster”. The faster you fail, the quicker you learn from your mistakes and can move forward.

What fantastic advice, Vanessa- thanks so much.

And many thanks to YOU, readers, for visiting!

As part of her book launch, Vanessa is hosting a giveaway! Check out these goodies: 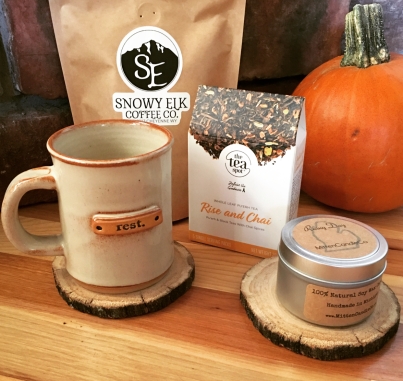 Here is the link to enter! The giveaway ends on November 9th.

He’s fighting for his country. She’s praying for his safety. When tragedy strikes, can their marriage and faith survive?

Charlie and Meg Winters are no strangers to the military life and the challenges it brings. But when an IED rips through his convoy killing his friends, the loss proves almost too much to bear.

Meg finds her trust in Christ wavering, and secrets she’s been keeping for years drive a wedge between her and her husband.

What if everything Meg believes is a lie?

What if Charlie finds out what she’s done?

Can Meg and Charlie save their marriage or will the horrors of war and the ghosts of their past tear them apart and forever shipwreck her faith?

If you’re interested in purchasing Soldier On, it is available here:

10 thoughts on “Publishing Paths: An Interview with Vanessa Rasanen”