I remember my great-grandpa fondly, as a tough old Swede who chopped wood into his 80’s, and who had a smile that beamed from ear to ear.

Long before my time, he served as an Army cook in World War I, and while in France cooked for the President’s daughter (or so family legend attests.) He returned to build a home for his bride amidst the pine and birch woods off the north shore of Lake Superior.

Though they’d moved out by the time I was born, visits to Great-Grandpa and Great-Grandma’s old house “Up North” were a highlight of my childhood.

My grandparents, aunts, uncles, and cousins would pile into the house, or camp in the yard. The kids would brave the mosquitoes and explore the woods. We’d pick berries and wildflowers, build dams and bridges on the little creek, and return to the house for cards and fresh fish from the river.

Of course, while I loved the house, it always had some…character.

I still find the steep descent to the dark, earthy basement a little alarming, and only go down when absolutely necessary.

I believe Great-Grandpa dug the pit that served the house’s septic needs himself, which, until it’s recent update, made using the facilities an adventure.

And then, there are the items we found in Great-Grandpa’s walls.

Age had taken it’s toll, and the house had become rather musty. My dad and I spent the better part of one visit during my late teens pulling apart the interior walls in the upstairs bedrooms so that he could clean them up.

The insulation- such as it was- contained some interesting objects. Probably the strangest was an old, ugly, housecoat.

What in the world…?

Maybe my family, never a group to waste anything, just thought that the housecoat would be useful for insulation. Personally, I like to think there’s more of a story there. Maybe one of the daughters of the house, my grandma or great-aunts, received it as a gift, and decided that it would be best if the unflattering thing just disappeared…

I don’t know if more clothing has turned up, but during more recent renovations, Dad found some items of particular interest to me.

I’m not sure just why newspaper and magazine clippings from the 1930s and 40s were in Great-Grandpa’s walls. Were they more insulation, or were they just one of those things that gets tucked into a “safe place” and forgotten?

Whatever the reason for their preservation,  they made for fascinating reading!

For instance, I learned about the danger of gossip during war-time, and the nefarious plots of the enemy. 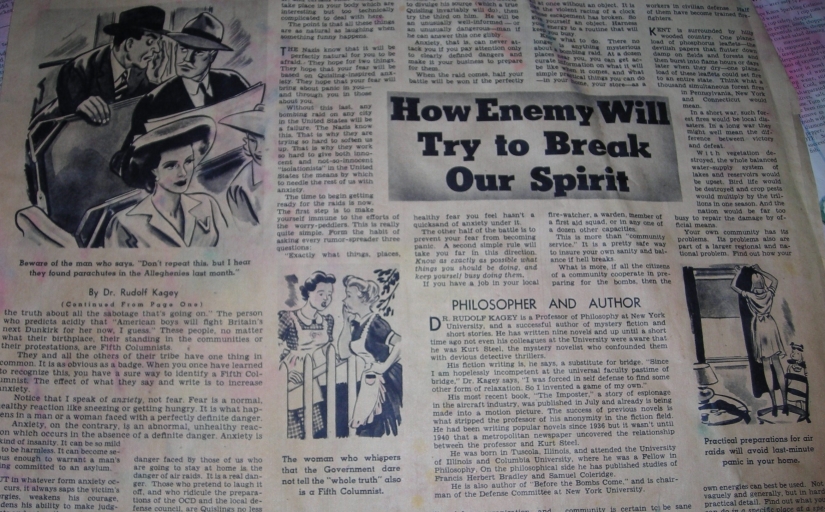 I also learned how to be more patriotic in my gas consumption, and some handy, low-sugar wartime recipes. 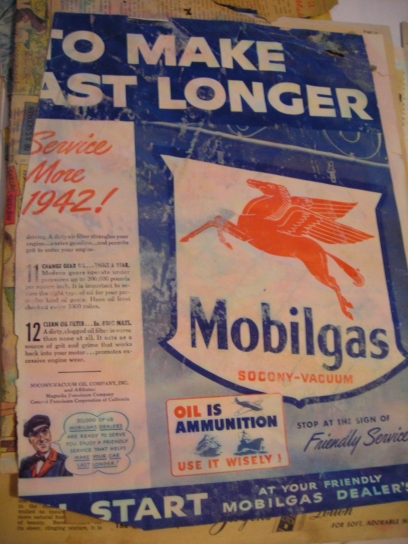 One of the more curious pieces was incomplete. The article appears to chronicle the story of a spy smuggling information to an Italian diplomat in Washington.

Whether the story records a real bit of war-time espionage, or was just a ploy to sell papers, it looks like it would have been interesting reading. However, I guess Great-Grandma was more interested in the recipes on the other side.

Ah well. At least I got some free dietary advice…

The stack of papers was quite a bit deeper, but I only found out about them on the last day of our visit. I am looking forward to getting a better look at them, and questioning Dad about just what else he’s found in Great-Grandpa’s walls!

Have you found any history in unexpected places?

43 thoughts on “Behind Great-Grandpa’s Walls”