Tomorrow is Memorial Day, the day the U.S. sets aside to remember those who’ve given their lives in service to their country.

Growing up, I spent a portion of each Memorial Day bumping slowly along winding cemetery roads.

My adult Memorial Days leave me with a nagging feeling that there’s something I ought to be doing, or somewhere I ought to be. Living so far from my roots, I can’t visit the old sites in person.

Of course, with or without a walk through the grass-covered plots, Memorial Day isn’t really about cemetery maintenance. It’s about taking a moment to remember those who’ve served, who’ve suffered, and who’ve sacrificed.

I treasure books that help me in this remembrance, that highlight the cost of the freedoms I cherish. One such is Voices of the Pacific, written by Adam Makos with Marcus Brotherton. 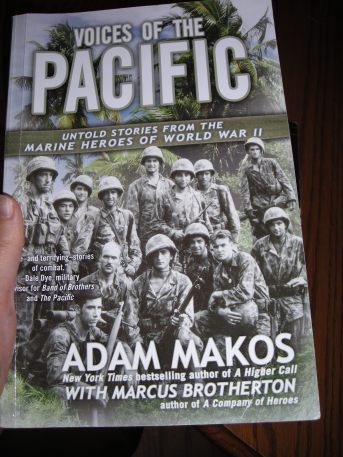 “On Monday morning, December 8, 1941, the day after Pearl Harbor was attacked, I was at work at the shoe factory in Mount Joy, Pennsylvania. I was twenty years old. I shut down my machine. The boss said, “What the h*** are you doing?” and I said, “I’m sorry, but I’m leaving to join up.” It was then that I heard other machines being shut down and guys saying, “We’re going too.” (Interview with Jim Young, Voices of the Pacific pg 3)

As the United States prepared to declare its entrance into the Second World War, individual citizens declared their resolution to fight. Enlistment offices flooded.

Voices of the Pacific opens in these tumultuous times. It is a collection of memories of fifteen Marines who served in the Pacific Theater of Operations (PTO).

The book was printed in 2013- none too soon. As time goes on, the voices that carry these stories are fading away. The author sums up his goal in these words:

“What follows is not a sanitized version of the war. It’s the last survivors talking to you, digging deep and pulling out painful memories, gut-busting humor, and rousing accounts of American bravery, sacrifice, and old-fashioned goodness. Here they give us one last tale, one last time.” (Voices of the Pacific, Introduction page xiii)

The authors actually narrate little of the story. Rather, each chapter is set up with title, location, and a brief introduction. Then, the Marines speak.

They share their stories, and we follow them through Guadalcanal, Australia, New Britain, Pavuvu, Peleliu, Iwo Jima, and Okinawa.

I found the book’s organization very effective. The first chapter, “We’re In It Now: Pearl Harbor,” shares the memories of Marines Sid Phillips, Jim Young and Roy Gerlach, all of whom joined just after the attacks on Pearl Harbor. Makos and Brotherton organized the men’s memories in short segments, so that they flow in roughly chronological order.

It’s almost like getting to sit in the room with these Marines while they’re reminiscing.

The subsequent chapters follow the pattern. New voices join the conversation as the narration moves to new locations, and old voices bow out as they pass the end of their service.

Of course, keeping track of who was who could have been confusing for someone like myself who has difficulty remembering names of people I’ve just met. However, the authors included captioned photos at the beginning of the book, listing the interviewees in order of appearance.

Like some of the troops’ service, the book does not end with the official end of the war. The book also shares stories of their (sometimes eventful) journeys back home, and how they went about rebuilding their lives.

As the authors’ quote that I shared suggests, this book doesn’t only deal with pleasant events, always use nice language, or gloss over the horrors of war that these men experienced (it’s not one for the kids!) However, as a glimpse of real experiences during an awful time, and as a remembrance of what these men suffered in service to their country, Voices of the Pacific is worth reading.

The final chapter, “The Last Words,” gave these 15 Marines a chance to leave a message for the generations of today. On this weekend of remembrance, I think that the last, a message from Marine Clarence Rea, is a great note to end on.

“I’ll be ninety-two soon, and I’ve got everything to be thankful for. A great family, a great wife, a bunch of great friends. I thank God that I’m still here…

My message to anyone is care about your country. America is a great country, and it’s worth taking care of.