Going to the movie theater is a rare event in my household.

My husband and I have to get awfully excited about a film to go to the trouble of finding babysitting and paying for an evening out.  Most of the time we decide it’s not worth it. Consequently, the last ‘recent’ movie I saw was My Little Pony: The Movie. (Rented for the kids. Really.)

While I may be slow to give new films a try, when I get a chance to view a classic film it’s a different story.

There’s just something about movies that employ stunt people instead of CGI, and that have to rely on their actors’ abilities rather than prettily digitized backdrops. I’m amazed at how a silent film like The Big Parade can portray the raw fear and anger and unbearable tensions of war without the luxury of dialog.

Of course, not all old all war films are serious.

Cary Grant was born in 1904 as Archie Leach of Bristol. He came to the U.S. at sixteen as part of a travelling comedy troupe. He remained in the States, broke into Hollywood with the help of contemporaries like Mae West, and eventually became a citizen.

Grant did not serve as a soldier in World War 2,*  but he did act the part in several films. In fact, his Operation Petticoat made the highest box-office earnings in his career. 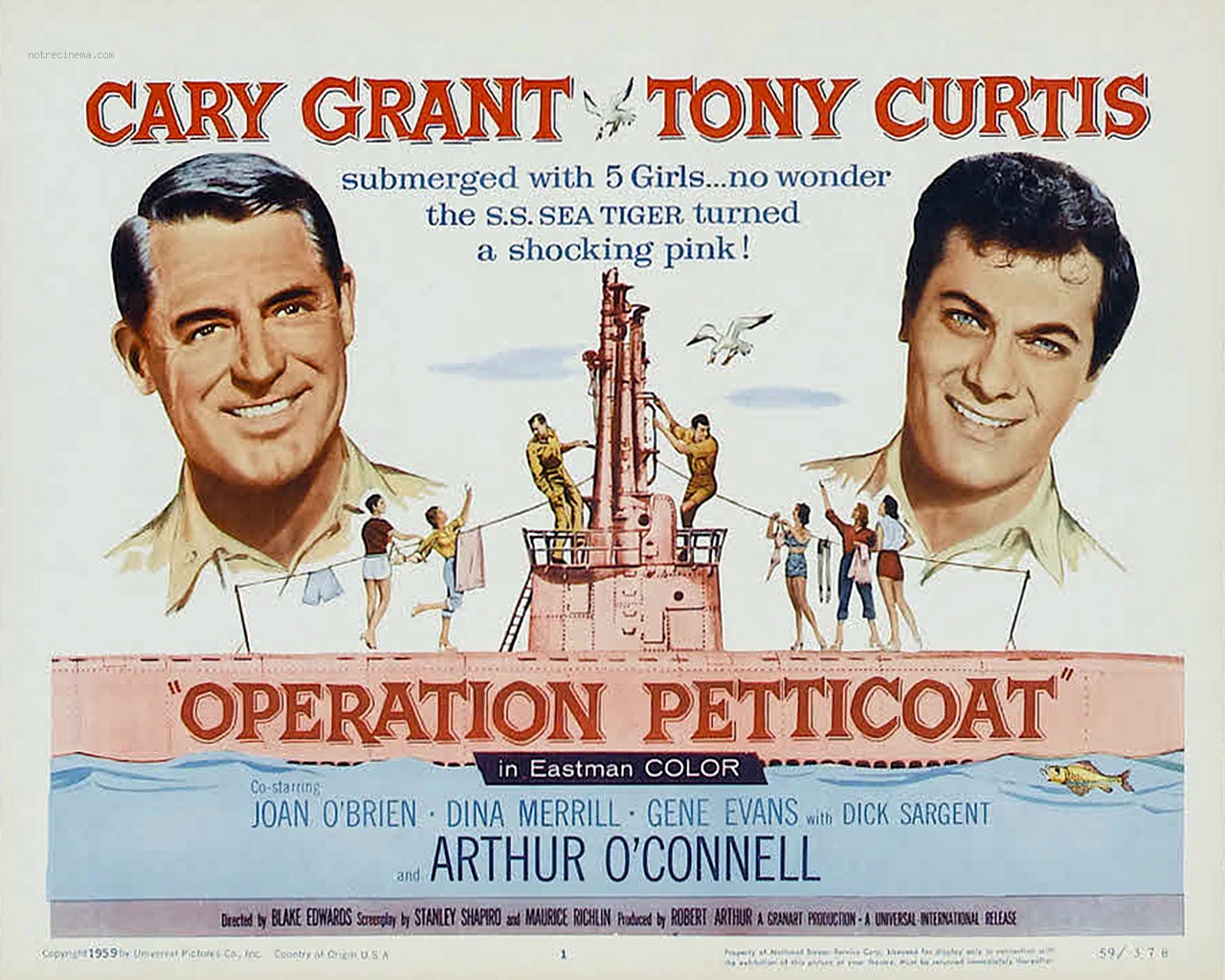 In Operation Petticoat, Grant plays Lt. Cmdr. Matt T Sherman. His brand new submarine, the USS Sea Tiger is, unfortunately, docked in the Philippines on Dec 10, 1941. She is sunk before she can ever sail.

Unwilling to allow his boat to be scrapped, Sherman and his ingeniously corrupt supply officer (Curtis) make enough repairs to get the Sea Tiger underway. They hope to make it to a safe shipyard in Australia to complete repairs.

Enroute they are forced to take a group of five stranded U.S. Army nurses on board. With the women crammed into the close quarters of the sub things go…about how you’d expect. However, the film is from 1959, and in spite of some romantic entanglements and awkward situations, things stay fairly tame. 🙂

If you’re looking for strict historical accuracy Operation Petticoat isn’t your best bet, but if you are willing to overlook a few small anachronisms, you may find that a bad paint job, an embarrassing tattoo, a torpedoed truck and creative uses for feminine garments all come together to make an entertaining, if very silly, film.

While Operation Petticoat was Cary Grant’s most monetarily successful film, I personally prefer one of his other visits to the Pacific Theater.

World-weary alcoholic Walter Eckland (Grant) wants nothing more than to sail away alone on his private boat. However, when he runs into a British officer of his acquaintance, he is ‘persuaded’ (as in, ‘forced by the deliberate sinking of his ship’) to stay on a small island, radioing reports on Japanese planes .

In an attempt to get someone to take his place and regain his freedom, Eckland inadvertently ends up rescuing a teacher (Leslie Caron) and the seven little girls in her charge.

While the romance that develops between Grant and Caron is a little odd, they work well together and the interactions with the child actors and the humor in this movie make it another silly, but enjoyable, piece of almost-sort-of-kinda-historical entertainment.

As an interesting side note, both films share more than a leading man. According to imdb.com they also share the same stock footage of a submarine. Ah well, waste not…

So, readers, do you have any favorites that could fall into the ‘classic film’ category? Whether they involve Cary Grant, World War 2, or neither, I’m always interested in recommendations 🙂

*While Cary Grant did not serve in the military, according to imdb.com he gave all of his fee from his 1940 film The Philadelphia Story to the British War effort, and his salary from 1944’s Arsenic and Old Lace to the U.S. War Relief Fund.

22 thoughts on “Cary Grant and WW2 on the Silver Screen”