Welcome to another installment of World War 2 history!

Last time I wrote about Hitler’s surprise attack on the USSR, and how it drew Stalin into the war on the Allied side.

The United States was still technically neutral as 1941 drew to a close. After all, they had their President’s promise.

In December of 1941, the United States still clung to FDR’s promise, to the hope that somehow they could stay out of the ’emergency’ over in Europe.

The people of the US were still recovering from the Great Depression. Memories of the horrors of the First World War lingered. Buffered by distance and the sheltering arms of two oceans, it seemed only sensible to let the rest of the world sort out its own problems.

Of course, there were those who disagreed.

Individuals, such as Bill Ash joined the conflict on their own. Various groups sent supplies to aid Great Britain and the USSR. The U.S. government wasn’t exactly neutral either.

The Lend-Lease Act, passed in March of 1941, allowed supplies and military aid such as weapons and vehicles to be sent overseas (without compensation) to nations deemed “vital to the defense of the United States.” Beneficiaries included Great Britain, the USSR, China and Turkey.

Side note: FDR justified the plan by comparing it to lending a neighbor a ladder if his house was on fire- after all, you wouldn’t charge him! Senator Robert Taft noted that the act would also “give the President power to carry on a kind of undeclared war all over the world, in which America would do everything except actually put soldiers in the front-line trenches where the fighting is.” https://www.history.com/topics/world-war-ii/lend-lease-act

Still, the American people, by and large, felt that their homeland was safe. Their news sources boasted that their Navy was the strongest in the world, and didn’t shy away from printing lists of all of the transfers of military personnel, and glowing, detailed descriptions of new military advancements.

Most of the news reports of the day focused on the Atlantic and the struggles in Europe. Japan seemed far distant- certainly not a dire threat to US security!

However, on December 5, 1941 the US and Japan were embroiled in neverending negotioations. Both sides said that they wished to stay at peace, though The US had been at odds with Japan since their invasion of China, had put embargoes in place, and was deeply concerned over troops massing in the area of Indochina.  The Japanese spokesmen insisted that they “desired no precipitate action”  and one, Nomura, insisted, “(A)s far as we are concerned, we are always willing to talk- after all, we are a friendly nation.” (Shirley 96)

In spite of these reassuring words, Japanese nationals were rapidly leaving the US and surrounding countries, and sailing back home.

“I address myself to Your Majesty at this moment in the fervent hope that Your Majesty may, as I am doing, give thought in this definite emergency to ways of dispelling the dark clouds. I am confident that both of us, for the sake of the peoples not only of our own great countries but for the sake of humanity in neighboring territories, have a sacred duty to restore traditional amity and prevent further death and destruction in the world.” (Shirley 132)

It is uncertain whether the Emperor ever saw the telegram. In any case, it was too late.

Sunday, December 7th, at 7:55 am, the Japanese launched their surprise attack on Pearl Harbor, Hawaii, without a declaration of war.

More than 2300 Americans were killed.

12 ships were sunk or beached, including the U.S.S. Arizona (destroyed) and the U.S.S. Oklahoma (capsized.) Nine other ships were damaged.

The citizens of the United States were shocked. Outraged. Unified. Galvanized.

On that morning, everything changed.

If you have eight minutes, President Roosevelt’s request for a declaration of war- the famous ‘day that will live in infamy’ speech- is worth a listen.

Thank you for visiting!

There are many, MANY excellent sources on this topic, which include more detail than I’ve provided in my little article.

My primary reading was from Craig Shirley’s December 1941: 31 Days that Changed America and Saved the World. Mr. Shirley goes through the month of December day by day, giving information as compiled from magazines and newspapers of the day. While it made slightly repetitive reading, it would be an invaluable resource for anyone writing fiction in this era. Mr. Shirley covers everything from the war to Hollywood to fashions and politics. 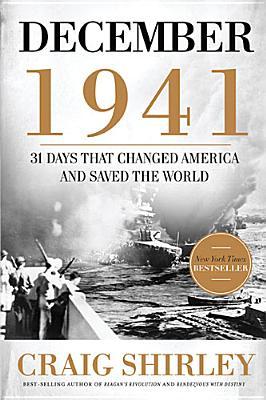 If you are looking for information online, here are a couple of resources:

Also, if you are interested in my previous articles on World War 2, here are links to: